My father found out he has prostate cancer about four months ago.  As a result, he wanted to go down the Brazos river with his sons.  He had read the book “Goodbye to a River” and had talked about doing the trip with his dad, but did not get around to it before my granddad died.  So my brother and I put it together and headed out today.
We decided to keep it a little closer since we had not done anything like this before.  Travel tip, avoid Hillbilly Haven. While we did have fun, the price to value ratio was way off. $15 each adult for an uncovered tube and a REALLY rough ride to the drop off point. The bathroom facilities should have had dirt floors since the toilet seemed to be optional to some previous guests. I felt dirty just walking in and out. Next time I think we’ll do Rochelle’s.  I had spent the night there with my wife some months back when we headed out that way to camp without reservations.  Although the site was very primitive, the water was clear, cool and moving.  We had a great time there and I think it would be a fun time down the river.  Also, while I lathered on the sun screen, twice, and spent much of the time waist deep, I still got plenty toasted.
I also had a milestone while on the river, I finally wore a hole in my Vibram KSOs.  It is a small one and I am going to see if I can repair them, but it may be time to retire my first pair.

This year my DW was determined to get the girls out of the state.  She had a window of time between summer classes, so she darted off with all the girls and headed out with her destination to make it to SLC, UT to visit her best friend.  As soon as she was down the road a bit, I bought a ticket to meet them with the intention of being there over the weekend and flying back.  The drive was very challenging for her and once out there, everyone got very homesick, so the decision was made that I would drive back with them.  We had a great time (most of the way).  I loved seeing SLC and having a local beer.  I especially enjoyed seeing Flagstaff, AZ again and some of the great scenery between here and there.

A few months ago, my boss calls me in and tells me I have quite a bit of vacation left and that it needs to be used before the end of the year or I lose it.  Feeling like Richard Pryor in “Brewster’s Millions”, I start trying to spend a bunch of days.  I took most of them at the end of the year so from 11 am on Thursday December 23 until Jan 2, 2011, I have been off.  It has been weird to have so much time off; however, since I had so much time, we decided to do a family vacation.  Our first choice was to drive 16 hours to Arizona to see some friends and ring in the New Year with them.  Fate being fickle, they had an accident and we had to call that trip off.  I decided there was no reason to stay home since we were all set to jet and anything under 16 hours in the car was doable.  Since bad weather was heading north east, we headed due south.
For our family vacation we ended up in Burnet, TX.  The hotel stay was not great.  Low water pressure, hard bed and ongoing renovations blocking much of the parking lot made staying a drag.  Thankfully, we did not spend much time there.  Our first trip out was to Enchanted Rock.  If you have never heard of it, it is a huge out cropping of Texas pink granite.  I would suggest getting there early since it is very popular.  We arrived just after 10 am and there was a line to get in.  The largest rock goes up about 450 ft with a gentle slope most people can climb.  A few of our party had some vertigo going up, but I had to chase our youngest up since she apparently has no fear.  Once at the top, you can see for miles.  Texas is pretty flat so getting up a bit gives you a view a long way off.  Going down was not much easier.  We went off one of the sides to see a little more and get out money’s worth.  We arrived at a small alcove and had a snack, then heading down we went over an old rock slide with a creek running down.  I’m sure a trip out at night must be amazing.  It would love to be up there near the stars one time. 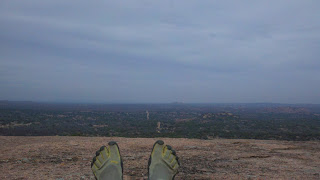 The monkey shoes made it. 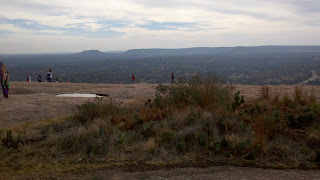 Life on a rock 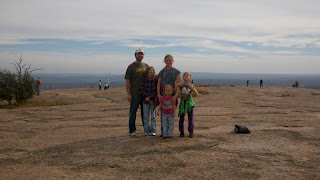 The family
The original plan had been to go to the caverns the same day, but we had spent about three hours going up and down that massive rock, so we headed back to the hotel.  On the way back, we stopped at a roadside farm and got some local products, apple cider, honey and soap.  In Llano we got beef jerky, pralines and wine.  I wanted to eat out and go to the park near our hotel, but everyone else was a bit tired, so I went and brought food back.  The local food was not great.  There are signs all over for “Storms Famous Texas Food” which was about the same as a Braums without the ice cream and twice as expensive.  The next day was tex-mex and it was sub-par to the great restaurants we have around here. 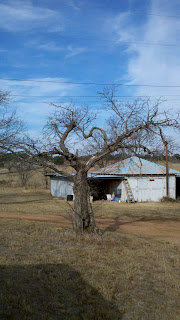 Heart shape in the branches
Later that evening, I took a walk to the town center which was closed up of course since it was a Wednesday after 5 pm.  There was one interesting feature though. There is a city block that is occupied by one or two churches. In between is Main Street Bethlehem.  Think Scarborough Faire meets christmas.  It is a pretty huge production which one would expect since this is Texas where our number one local product is churches.  I made my way to the park where they still had some christmas lights up.  I got a little Dairy Queen and head back to the room. 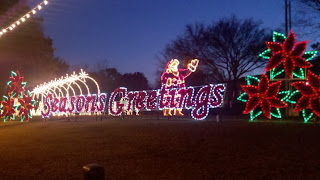 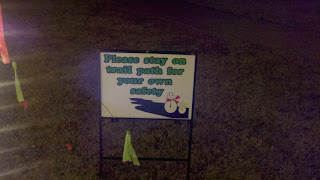 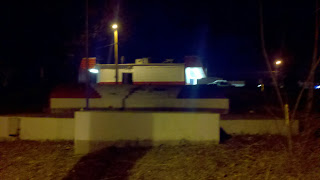 Abandoned concrete bandstand in the park.

Our Next trip was to Longhorn Caverns.  The caves had been used at least 400 years ago by the local natives but hte park as it is today is available to us thanks to the socialist Civilian Conservation Corps (CCC) .  I jest since my grandfather was a part of this project and we have many state parks thanks to the program.  Be aware, the “GPS directions” are a little off.  you need to head further south on Park Road 4 up a huge hill.  The map tries to put you somewhere in Inks Lake State Park.  The cavern was formed by running water, so it is a little different than other formed by water seeping in and dissolving the rock.  There are some unusual features like the Queen’s Watch Dog and Queen’s Throne.  The whole tour was about 1.5 hours and I made much of that carrying one child or another.  Deep in towards the end, it gets a little low and tight and feels a little claustrophobic, but everyone made it through ok.  We also saw a couple of tiny bats.  They used to fill the caverns, but stopped nesting there due to all the people going in and out. 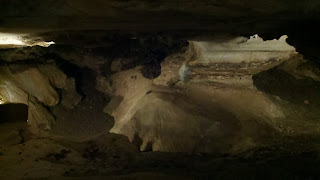 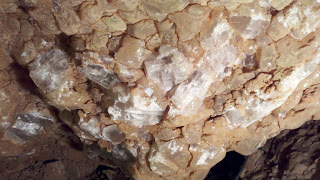 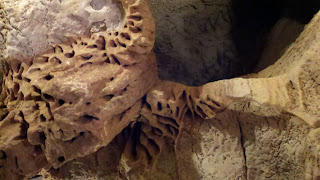 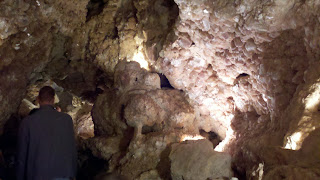 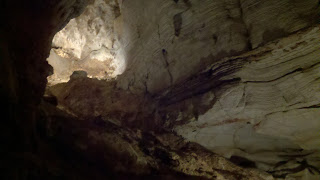 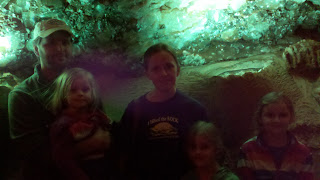 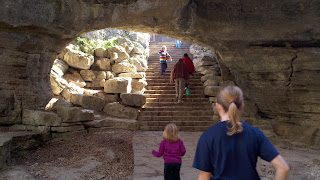 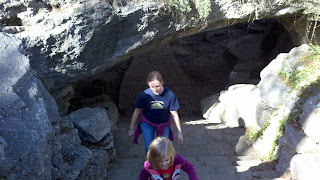 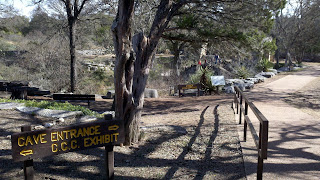 Brought to you by “socialist” programs 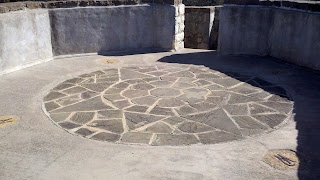 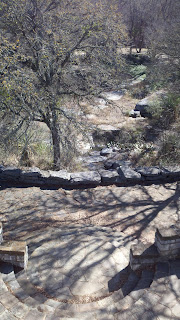 View from the tower
So three days and two nights in tight quarters and strenuous conditions with the family. I really enjoyed the time we got to spend together with the mix of roughing it and modern conveniences.  One of the most useful tools we had were our phones with maps and interwebs and only lost service a couple of times in the most remote areas (or deep underground).  I look forward to more trips like this in the future.