I went out dancing wit my beautiful bride last night at Pearl’s Dancehall & Saloon in the Fort Worth Stockyards.  I drank just enough to loosen up and get out on the dance floor.  After a few false starts, we were able to get around the dance floor without hurting ourselves or those around us.  I had a lot of fun and look forward to future trips.  I got to bed about midnight and a few hours later one of those famous Texas thunderstorms passed through.  Kids and pets got stirred up, so sleeping locations were rearranged.  I got up to get a drink of water when I found my nutball mut in the window, four foot off the ground.  She was pretty stirred up.  Tried to sleep, bot woken up by one of the cats.  Went to sleep, woke up at 5am, no reason.  Went back to sleep and got up at 6:45 to get out to Dallas for the Texas Lottery event releasing the new Star Trek scratch off.

I was there about four hours, got to see some great costumes, meet some lovely and interesting people and be counted in an attempt to break the Guinness record for most costumed Star Trek characters in a room.  We missed the record, 1064, by half.  May have had something to do with being on Easter weekend.

I got home, made lunch and went to work in the garden for a few hours.  I just finished dinner and I’m completely wiped out.  Need to find some energy to help dye eggs with the kiddos then I may call it an early night.

There is a small area in front of our house that had bushes and some vining ground cover.  Mel has wanted a seating area out there for a while so I did that project this weekend.  The area is bout 3′ X 6′. On day one, I cut the bushes, pulled and replanted the ground cover then moved the roots and about 6 inches of dirt.  Day 2 I started moving and setting stones.  I used the old concrete blocks I had collected for making a back porch.  It took me the better part of the day to set the stones, fill in the dirt then put the left over dirt in the garden and clean up.

OAK PARK, Mich. (WJBK) – “The price of organic food is kind of through the roof,” said Julie Bass.

So, why not grow your own? However, Bass’ garden is a little unique because it’s in her front yard.


Get the rest of the story here.

So back to the original intent of the blog which was to show projects you’d see on HGTV, but with all the reality left in.  The project here was making raised garden beds for our front yard garden.  I had suggested this about 2 years ago, but my DW did not want to incur the cost and there was something about the aesthetics she did not like.  After a season of getting run over by grass and weeds, over grown tomato plants that turned into ground creepers and a husband willing to pay the price in dollars and hours we are now doing raised beds. 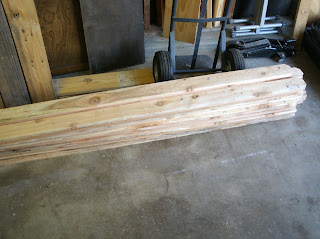 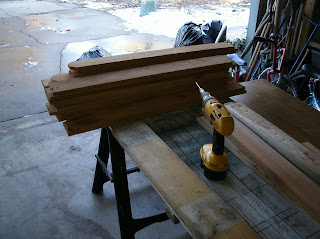 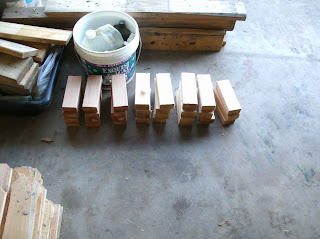 Step two was to assemble the long sides.  Two long panels and two rail pieces with an added rail in the middle for support.  The planters were stacked two boards tall to give us 7″ beds.

Step three, assemble the boxes by putting your longs rails on the ground, standing on their sides and attaching the short panels to one corner then the other.

Sounds easy right?  Well, the notes to self are as follows:

Now the garden will have 8 raised beds with mulch paths running in between.  This will keep our good soil in one place uncompacted.  I will post further pics as the season goes.
Here are the pics of the finished beds set: 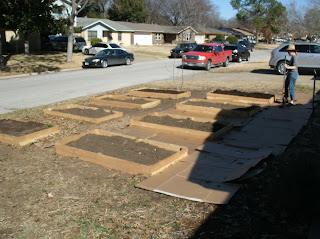 Beds laid out, Mel is putting down the mulch for paths 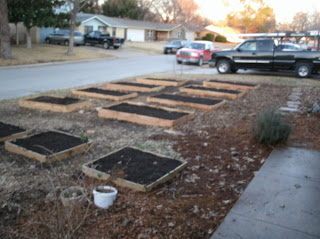 Mulch in place (what we had) and compost filled beds. 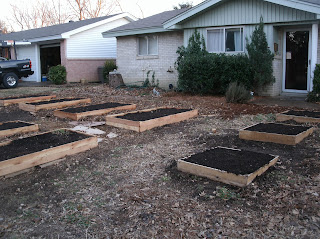 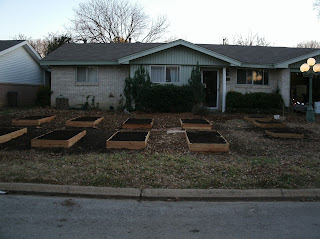 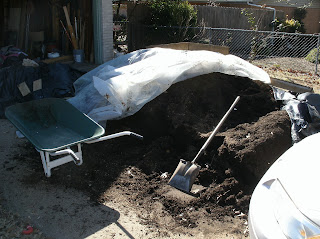 Started with 8cu yds of compost.  That was…a little too much. 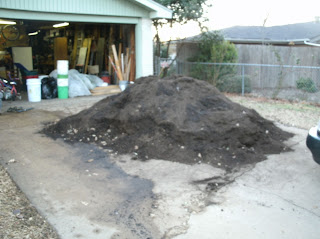 What was left.  Still finding places in our yard to put it.