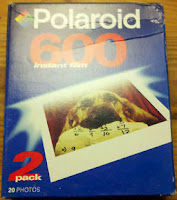 My dear wife has a ritual of hitting the various schools at the end of term to benefit from the mass clean up at schools that happens each year.  Kids leaving college for home and teachers sick of yet another year toss out so much usable stuff.  This year she hit a few of the local elementary schools and found some old head phones and two packs of Polaroid 600 instant film.  The only reason I knew this had any value was I had been given an instant camera last year and was looking for film.  I decided pretty quickly I did not want to spend $35 for 10 photos.  So I listed the two packs she found and they each sold for a little over $35 each.  So keep your eye out for valuable “retro” items some people may want, but remember to declutter if it ends up just being junk.