Skip to content
I finally got my big tattoo that I have been waiting on for a while.  First a little background.  My cousin Mike got me an X-Men graphic novel years ago for Christmas.  I read through it in a hurry and wanted more.  The one character I loved the most though was Wolverine.  By the point I started reading, they’d released his Limited series and his monthly series was about 5 published.  I picked up my Wolverine Vol. 1 #1 at a local shop in mint condition for $3.50.  I tracked down the limited series pretty soon after and was my first mail order comics. 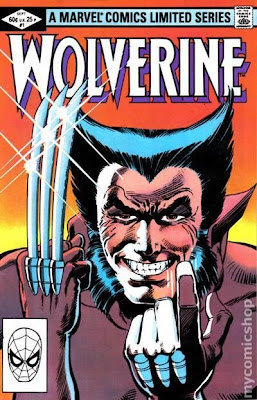 The story was one of the best and only increased my love of comics.  I went on to collect everything wolverine, even his first appearance in Hulk #181.  Because of my love of comics, I started going to conventions and collecting sketches in a book, volunteering and finally collecting photographs and signatures of celebrities.  Conventions have shaped much of what I do for hobbies now, so it was fitting to honor the reason for all of that in a tattoo.
Why Wolverine Ltd. #1?  The story set one of the major elements of his back story, specifically his time in Japan.  I have always had a fascination with Japanese culture.  The cover is unique in that it is not Wolverine in his more well known blue and yellow suit.  More plainly, it is less “comicy”.  It has also been copied many times.
I came across Clint Cummings of Sparrow Tattoo in Mansfield, just a short drive down the road.  He was also featured on Ink Masters.  I was drawn to his comic themed tattoos.  Here was a guy that didn’t just copy from a picture, he understood the characters and knew their stories.  They were important to him, so he could capture their essence.  He is also a really talented artist.  It took a while to get the appointment as he is in demand, but I finally made it in Saturday July 13, 2013.
The whole experience was somewhat surreal.  I had to wait a while for him to draw out the design.  They had “Cabin Fever” playing on one of the TVs.  I could not hear the words, but the movie just looked ridiculous.  It was a “horror” but mostly just gory.  Something about a skin disease, which did not help.  When I laid down for the tattoo, I listened to my own music for a while, but my batter started running low and it was hard to hear with their music playing as well.  The music they had playing was a strange mix of heavy metal, Muse, soft rock covers, etc.  Finally, the TV in front of me kept playing “reality” TV crap, but mostly some show about a pawn shop which was nothing but drama.  All this, while I’m in a lot of pain.
It took a little more than four hours, but came out better than I’d hoped.  Full color and with a modified background for the transition.  I am really happy with the work and expect that I’d have at least one more done by him if not more at the shop. 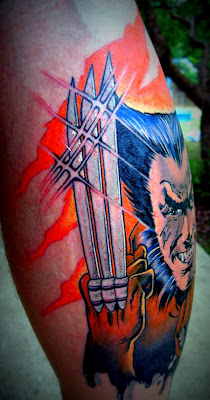 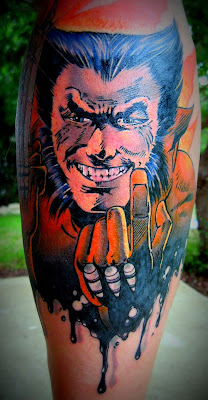 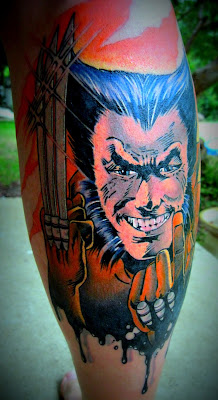