Skip to content
It took a while, but I finally collect enough photos and autographs to make the wall in my office something to talk about.

I have been going to convetions seriously since 2003.  Back then, I mostly got sketches from my favorite artists.  While I still do that, the past two years I have made it a point to get autographs and photos with some of my favorite celebrities.  I thought these would be better in my office than copies of the sketches.  It has worked out as well as I’d hoped, though I have to explain who most of the people are.  I also wanted to get my degrees on the wall.  That is high school through masters pictured.

The hardest part was finding a way to get them on the wall.  I wanted something that was easy to hang, not requireing a lot of leveling and holes in the wall, was easily adjustable and relatively understated so as not to detract from the photos.  I decided on STAS Picture Hanging Systems.  It uses a bar across the top that you need to anchor and make level, then has cords that hang down and clips that slid into place.  The pictures can be adjusted both vertically and horizontally this way.  My only complaint is that the hanger clips are much more visible than pictured and they are pretty thick so the frame is pushed off the wall a bit and tilts making it hard to level..  I have ordered the smaller clips in the hopes that they will be less visible.

I also wanted all matching frames.  I chose FrameUSA.com and went mostly with their Architect picture frame in black since it was simple and understated.  They frames arrived quickly and well packed.  Of the 30 or so frames I ordered, only one had cracked glass which I found a replacement for at Home Depot.  Since nothing is ever perfect, my only complaint here was I did not get the hanger on the back for the smaller ones, perhaps I ordered the wrong one and the ones that did have it you have to attach it yourself.  Home Depot again had the parts I needed and a couple of hours later they were ready to be hung.  One note, when putting the hanger on, always mark and prepunch the holes.  The hanger itself is pretty flimsy and the frame seemed to be a pretty solid oak or other hard wood.

I plan on getting a few more photos in May at Dallas Comicon, where William Shatner and some of The Next Generation cast will be appearing.  I have space here to add about 6-7 then I may need to expand to a new wall.

I volunteered for the Official Pix team again for their Sci-Fi Expo.  It was a great show.  I got to meet many wonderful celebraties who were all too happy to take time with each fan and even engage my kiddos in coversation about who they were and if they were enjoying the show.  I got a few signed photos and a picture with Mr. Avery Brooks, Capt. Sisko of Star Trek: Deep Space 9.  Such a great guy, and the second Star Trek captain on my wall.  William Shatner is scheduled to be in town for hte May show, so I am hoping to make that number three. 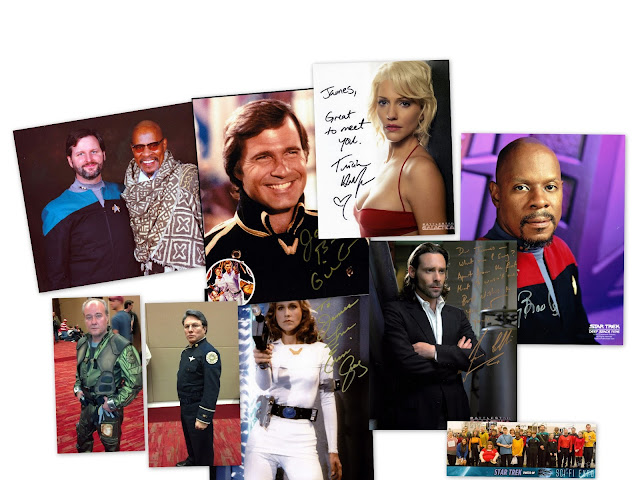 I had the opportunity to volunteer at the latest Fandays put on by C2 Ventures at the Irving Convention center.  The group produces three of the best shows in Texas.  Officially, the Fandays in October is Star Wars themed.  Scifi Expo in February is a general science fiction convention and May is for Dallas Comic Con which focusing on the comic book industry and is the largest of the three shows.  Each show features loads of comic, toy, costume and other vendors.  Many artists come to the show to talk about their current work, visit with fans and do commission sketches.  One of the best parts are the visiting celebrities from the tv shows and movies where you can get autographs and photos.  These two to three day events are a lot of fun for the entire family.
Of course, you have to pay to get into these shows, or you can volunteer.  It would be impossible to put on shows this large and pay everyone working.  Volunteers give up about 4-6 hours in exchange for free entry.  You might wrangle lines of people, help selling merchandise, guard doors, etc.  However, after doing it a while, you might also get the chance to sit with and help visiting celebrities and artists.  They typically need help managing the money taken in for autographs and photos.
This past weekend, October 19-21, I had the opportunity to help out Dina Myers (Star ship Troopers, Birds of Prey, etc.) and Ray Park(Star Wars: Phantom Menace, G.I. Joe, X-Men).  I got to meet Sean Astin(Goonies, Rudy, Lord of the Rings), Casper Van Dien (Starship Troopers, Tarzan, Sleepy Hollow) and Robert Englund (Nightmare on Elm Street, “V”).  I also had a couple more sketches put in my book by Ben Dunn, Frank Cho, Josh Howard, James O’Barr and Cal Slaton.  Finally, while I did not get anything from him, I got to see the talented Mathew Warlick again.
Dina is really sweet and a lot of fun to work with.  She is just a beautiful in person as she is in photos and on the screen.  She is very connected to her fans through twitter and spent some extra time with a few longtime followers.  Ray Park is just an awesome person to be around.  He took plenty of with each of his fans, asking about them and sharing stories and encouragement.  I was sitting close to Casper while helping Dina.  He is really funny and outgoing.  Sean is a great and humble guy also taking lots of time with each fan.  Each of the artists I got sketches from were nice and personable if not a little eccentric.