I know I am slow to start, but I have a few entries to make up for it.  These are entries for The Steampunk Challenge.  Please visit the links to see many examples of the Steampunk genre and get reviews to help you make a decision on which to try.
My first entry is Boneshaker by Cherie Priest.  From the publisher:
“In the early days of the Civil War, rumors of gold in the frozen Klondike brought hordes of newcomers to the . Anxious to compete, Russian prospectors commissioned inventor Leviticus Blue to create a great machine that could mine through ’s ice. Thus was Dr. Blue’s Incredible Bone-Shaking Drill Engine born.
But on its first test run the Boneshaker went terribly awry, destroying several blocks of downtown and unearthing a subterranean vein of blight gas that turned anyone who breathed it into the living dead.
Now it is sixteen years later, and a wall has been built to enclose the devastated and toxic city. Just beyond it lives Blue’s widow, Briar Wilkes. Life is hard with a ruined reputation and a teenaged boy to support, but she and Ezekiel are managing. Until Ezekiel undertakes a secret crusade to rewrite history.
His quest will take him under the wall and into a city teeming with ravenous undead, air pirates, criminal overlords, and heavily armed refugees. And only Briar can bring him out alive.”
As a first read I think this was a pretty good start.  You have all the key elements of what I like in steampunk, old world around 1860-1890, high technology that should not be around but could have and airships…lost of air ships.  The story starts off a little slow, introduced as a history lesson.  Later the story is told from both Zeke’s and Briar’s perspectives alternately.  The world is laid out with detailed care as Ms. Priest took the time to look at maps of the area during the general time period.  A few reviewers had criticized the author for having flat characters.  I found the two main characters well thought out, but very aggravating.  They are stubborn and untrusting and it makes the reader want to knock them in the head for making their lives more difficult.  There are a lot of other characters introduced, but are left flat.  I presume the author intends to write more in this world focusing on some of these others as time goes on.
I really enjoyed the horror aspect of the story added with the zombies that seem to be everywhere.  We are told that the mysterious “Blight” gas is to blame, but no further details are given.  I also like the hints of the US Civil War going on which would have a huge impact on any steampunk placed it .  The two protagonists’ are hounded both directly and indirectly my the mysterious Dr. Minnericht.  Though the tries to keep the true identity secret, it sometimes feels contrived.  As I stated before, I found the two main character irritating, but that may be my failing as the author intended to show what two people might be like under very difficult conditions.
Overall, I think the book is worth the time to read for anyone who loves steampunk or just lovers of science fiction. 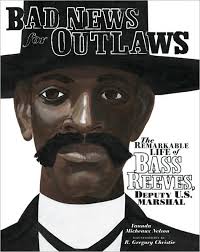 From the publisher:
“Sitting tall in the saddle, with a wide-brimmed black hat and twin Colt pistols on his belt, Bass Reeves seemed bigger than life. As a U.S. Marshal – and former slave who escaped to freedom in the Indian Territories – Bass was cunning and fearless.
When a lawbreaker heard Bass Reeves had his warrant, he knew it was the end of the trail, because Bass always got his man, dead or alive. He achieved all this in spite of whites who didn’t like the notion of a black lawman.
For three decades, Bass was the most feared and respected lawman in the territories. He made more than 3,000 arrests, and though he was a crach shot and a quick draw, he only killed fourteen men in the line of duty. Bad News for Outlaws reveals the story of a remarkable African American hero of the Old West.”
I had the good fortune to run across this when I was down town and as luck would have it, our local library had a copy.  I love stories of the Old West, especially the ones that are about characters that just seem larger than life.  After reading this and looking at some of the other resources, Bass Reeves was just one of those characters.  While the man’s life would seem the stuff of legend, many of the events are backed up by other sources.  The author, Vaunda Micheaux Nelson, uses colorful language and slang from that time to add to the enjoyment of the book.  She also has a short biography of Judge Parker (of Parker Co. fame), a list of other resources and glossary of terms.  While it is a kids book, I think I got more out of it than the kiddos.  It’s definitely worth a look.
http://en.wikipedia.org/wiki/Bass_Reeves